Introduction: High-intensity interval exercise is a training method that has been popular according to the American College of Sports Medicine. Traditionally, we verified the predominant usage of ergometers (treadmills and cycle ergometer) during interval exercise sessions. However, battle ropes exercise are a alternative to other exercise modalities.

Materials and Methods: Eight college men (24.9 ± 7.0 years, 25.2 ± 3.6 kg/m2, and 38.9 ± 3.4 ml·kg-1.min-1) having no experience with battling rope exercises completed two different experimental sessions: simultaneous and alternating arms in a random order, and a 4 × 30 s all out (4 min of passive recovery). We used two-way analysis of variance with a significance of p < .05 for the analysis between groups.

Conclusion: These data show that there is no difference in the acute cardiovascular response of battling rope protocol exercise involving different modes (alternate or simultaneous). These results suggest that the intensity generated during BRP exercise can be sufficient to improve and maintain maximal oxygen uptake in healthy people.

High-intensity interval exercise is a training method that has been popular throughout the scientific community and is classified as one of the top fitness trends according to the American College of Sports Medicine (ACSM) (Thompson, 2020; Veiga et al., 2017). The intensity level of the stimulus in high-intensity conditions characterizes the method of training (Buchheit et al., 2013). When the stimulus is applied between 30 s and 4 min duration, in submaximal (> 80%) or maximal (100 %) intensity, it is referred to as a high-intensity interval exercise session (HIIE). Alternatively, when the said stimulus is given between 10 and 30 s, in supramaximal intensity (> 100 % or all out), it is called sprint interval exercise (SIE) (Buchheit et al., 2013). Studies have shown that HIIE and SIE protocols are effective for significantly improving physical fitness related to health and athletic performance (Alonso-Férnandez et al., 2017; Bishop et al., 2007; Buckley et al., 2015; McRae et al., 2012; Thompson, 2017).

The posteriori sample size calculation was performed using V02 peak ANOVA-values and was based on power (1–β) .9 and an alpha error of.05. Power analyses were computed by the G*Power 3.1.9.21 (Franz Faul, Universität Kiel, Germany) for four repeated measures (correlation among the measures; r = .45), and a minimum of 8 participants were necessary to carry out the study. Eight healthy, habitually active men (24.9 ± 7 years, 38.9 ± 3.4 mL/kg/min) participated in this study (Table 1). Participants were recruited from the university campus, via personal or printed invitations in a university setting, and online social networks.  Participants were healthy, exercised regularly before initiating the study, and none were taking any medications or supplements known to affect performance. There were no recent cases (within 12 months) of osteomyoarticular injuries, and all had negative answers to the Physical Activity Readiness Questionnaire.

We dismissed participants who were unable to complete any one of the sessions, or who started another exercise intervention. All participants were informed of the experimental procedures and signed the informed consent. The study was approved by the research ethics committee with human beings (55357016.1.0000.5192; nº033418/2016) of the local university and followed all the norms of resolution 466/12 of the Health National Board.

We randomly selected volunteers for exercise sessions that included simultaneous arms (simultaneous) and alternating arms (alternate), in an SIE protocol with 4 × 30 s all out: 4 min of passive recovery, with 48- and 72-hour intervals between sessions. Random numbers taken from the website www.randomizer.org defined session randomization. Before the BRP, the volunteers rested for 5 min to analyze their resting heart rate (Polar, FT4 model, Finland) and blood pressure (OMRON DALIAN®, HEM 7113 model, China) to obtain base values at the onset of the activities. We measured the variables HR and VO2 during the sprints (30 s) and during every minute of recovery (4 min) in all conditions.

Initially, we measured the volunteers’ body masses and height for the computation of body mass index, using a scale (Filizola, Brazil, 100g precision) and a stadiometer, following the recommendations of the International Society for the Advancement of Kinantropometry. To determine the oxygen peak consumption (VO2 peak), we used the Buckley protocol (Buckley et al., 2015) with a treadmill (Super ATL, Inbrasport, USA) and a Cortex metabolic computerized analyzer (QUARK COSMED CPET, Italy) in the mode breath by breath and Hans Rudolph Linc masks (USA). Thus, participants underwent one 2-min session of familiarization, focused on performing the exercise in BRP (both simultaneous and alternate). Following familiarization, they were asked to return to the lab between 48 and 72 hours later for the sessions.

The volunteers completed two experimental sessions (25 min each), separated between 48 and 72 hours. Before the BRP, the participants rested for 5 min for the analysis of resting heart rate – HR and blood pressure to obtain safe values to start the efforts. Following this, they had a standard 5-min warm-up and BRP. During the BRP (simultaneous and alternate), the volunteers were instructed to perform the most repetitions in 30 s (receiving verbal conventional encouragement “go, go”), followed by a 4-min passive recovery. The stimulus: recovery (1:8) was repeated four times, totaling 18 min [4x (30 s all out, 4 min recovery)]. In the simultaneous arms session, the participants performed the repetitions simultaneously, while in the alternating arms, they alternated. The rope used was nylon, with a 9.7 m length, 11.4 kg weight, and a circumference of 17 cm, and was fastened to a rod in the ground. The volunteers held approximately 4.85 m of rope in each hand.

Initially, we tested the normality and homogeneity (Shapiro–Wilk and Levene). Two-way analysis of variance (ANOVA) with repeated measures was used to measure differences in VO2 peak and HR peak between both exercise conditions (simultaneous and alternate arms). Tukey’s post hoc analysis was used to determine significant differences. The effect size was calculated with the Psychometrica calculator. The values considered were: ᶯ2 < .20 trivial, 0.20 – 0.59 small, 0.60 – 1.19 moderate, 1.20 – 1.99 large, and > 2.0 very large effect. The significance level was set at p < .05.

All participants completed the stages of the study and were included in the analysis. On average, they were eutrophic, with VO2 peak values comparable to actively trained men. Individual values are shown in Table 1 and did not identify differences in either of the variables between the participants (p < .05).

Table 1
Characteristics of the participants of the study (n = 8).

As we can see in the results above, there is substantial heterogeneity between the protocols and an apparent association between the lower recovery time (<45 s) and the highest metabolic demand. However, it is possible to identify that the results are independent of the type of protocol or execution condition (alternate or simultaneous). The battling rope exercise facilitates the reach of vigorous and moderate levels of intensity, complying with the recommendations of ACSM, by being capable of important cardiovascular and neuromuscular adaptations to obtain better indices of maximal aerobic power. The potential benefits of battling rope exercise were presented in a recent research paper by Chen et al. (2018). The researchers studied the effect of an 8-week intervention with battling rope and observed significant improvements over core localized muscular resistance, aerobic capacity, and upper body power.

Although our results are exciting, there are some limitations to the present study. First, we did not use a metronome to standardize the repetitions or velocity for each exercise. Second, the participants had only one session in each form, and we did not verify the reproducibility of the results. Finally, we had a reduced number of volunteers and only included young male adults without familiarity of exercise method. Thus, future work is needed to investigate the acute and chronic effects of the movement variation in battling rope for different gender and age groups, controlling the number of movements per stimulus.

This study showed that there is no difference in the acute cardiovascular response of BRP exercise involving different modes (alternated or simultaneous). Moreover, according to ACSM, these results suggest that the intensity generated during BRP exercise can be sufficient to improve and/or maintain maximal oxygen uptake in healthy people. 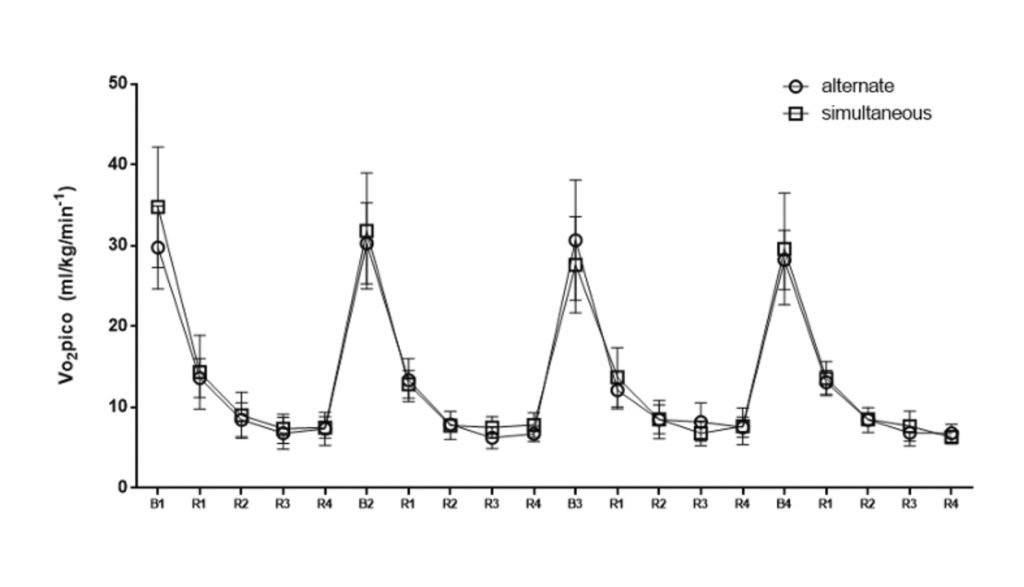 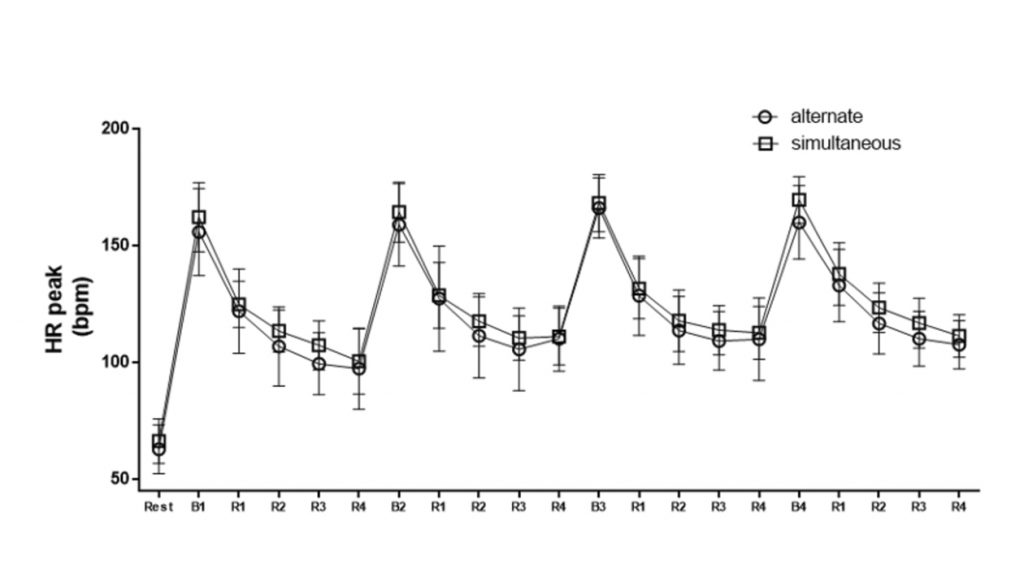